It Started Out Slow, Then it Started to Grow: Barrington Sunfish Regionals 2014 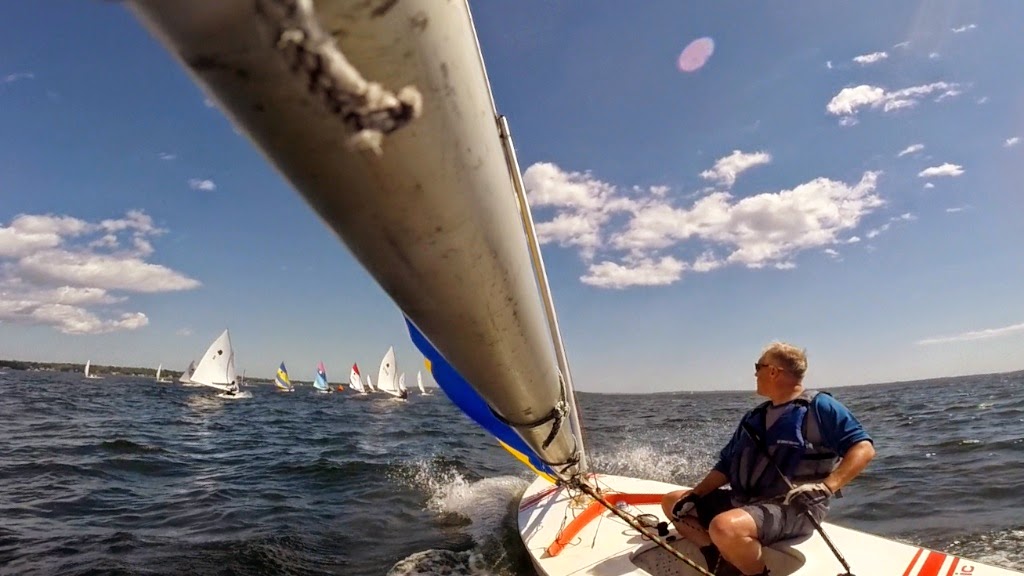 When it came to the wind, the 2014 New England Sunfish Regionals had it all.  29 Sunfish sailors showed up on Saturday to compete. Both days started out with virtually no wind.   Saturday saw one race completed before the morning breeze dies and an two hour delay ensued.  When the sea breeze finally arrived, it decided to make up for lost time, blowing at a steady 15 mph for the rest of the afternoon. The calm seas of the morning also gave way to a pounding 1 foot chop. The booming of hulls pounding on the water sounded like artillery at times.

At teh end of the day, Amand Callihan proved to be the Master of the Wind and Waves, hitting for the cycle, taking a 4th, 3rd, 2nd and 1st in the first 4 races. Bill Brangiforte and Matt Coughlin sat in 2nd and 3rd after the pounding was finished.

Day two started out to be a repeat of day 1, but with less wind all around.   John Hause commented that it was nearly the first time he had ever seen a wind speed of 0 reported at Conimicut Light (Which can be easily seen from the race course).

A much more mellow sea breeze arrived late Sunday morning, but it too brought the chop, stopping boats dead in the water just when they were starting to make headway.  Again Amanda Callihan ruled the day, taking a 1st and a 2nd to take the Championship.  Youngster Matt Coughlin took second, just 4 points behind Amanda, and Ken Charles roared out of 8th place on Saturday to take 3rd overall.

Massapoag skippers did not fare so well this time out.  Kevin Buruchian came in 13th, Mark Stoughton came in 26th, and Bernadette Levesque 27th, 3 points behind Mark. Kevin had two races that he said "are the kind you don't want to talk about", and those did him in. Neither Mark or Bernadette had experience with the chop, and it slowed them both down badly.  Mark said that after sailing at Massapoag for so long, that he was confused by the "wind that always came from the same direction".


Massapoag Sunfish racing resumes next Wednesday with the Double Secret series, and the regular Sunfish Saturday series starts in earnest next weekend.