The wind paid its biannual visit to Massapoag just in time for the 7th Annual Sunfish/Laser regatta.  13 Sunfish and 12 Lasers faced the indecisive 15 knot winds that punctuated the 9:30am Skipper's meeting.  The wind displayed true indecisiveness, starting at 15 knots, then building to 20, then puffing to 25 in gusts.  It also couldn't settle on a direction, shifting from due North, to due East, then back to North, before settling on Northeast.  15-20 degree shifts were normal, as were reaches that became runs, and runs that became reaches.  There were also a few pockets of completely calm air in the maelstrom, where skippers could sit and watch all of the other competitors go by them.

Among the Sunfish fleet, there were surprisingly few capsizes for such challenging conditions, although one Sunfish suffered a mechanical breakdown and had to retire. Racing was close for the most part, and sometimes huge gains or losses could be had on the downwind legs. Boats that were out of it at the windward mark were back in the thick of things at the leeward mark. The Sunfish finishers at Massapoag reversed their season's finish at Barrington.  Scott Greenbaum sailed out of Massapoag in First Place, with Bill Brangiforte in second and Andy David in third.


Next week is both the start of the Saturday Sunfish series and the Sunfish Regional Championships (part 1) at Barrington Yacht Club. Two skippers from MYC, Bernadette Levesque and Mark Stoughton will be representing Massapoag at the regionals.
Posted by Unknown at 7:26 PM 2 comments:

Winter Makes a Return Appearance Only Three Days Before the Regatta!


Sunday it seemed like someone put the lake indoors away from the wind. Today it was in the refrigerator. The case of ADHD in the atmosphere is making it hard to go racing. For the second time this week, racing at MYC was cancelled. Sailors are frustrated at being denied additional racing time before the Sunfish/Laser Regatta.

Speaking of the Sunfish/Laser Regatta, it is coming up in only 3 days!  The weathermen are predicting 65 degree temps, 8-10 mph southerly winds on the racecourse. It sounds like a perfect day for racing. Come and show your stuff!

The 7th Massapoag Yacht Club Annual Sunfish/Laser Regatta is coming next weekend, May 31, 2014. Come down and pit your racing skills against some of the best Sunfish sailors the region has to offer.  If you are an old pro, or new to racing, please come down. We will be running A and B fleets, so if you are new to racing, you still have a chance to show your stuff. MYC PRO Greg Kampf is famous for knowing the lake and for running excellent regattas, so I know that the racing will be top notch.

The visiting championship Sunfish skippers always provide excellent racing, plus they are gracious enough to share their racing knowledge with everyone, so the regatta often becomes a Sunfish racing clinic as well as a regatta.

The NOR and Registration forms are Here on the Club Web Site.
Posted by Unknown at 5:33 PM 4 comments: 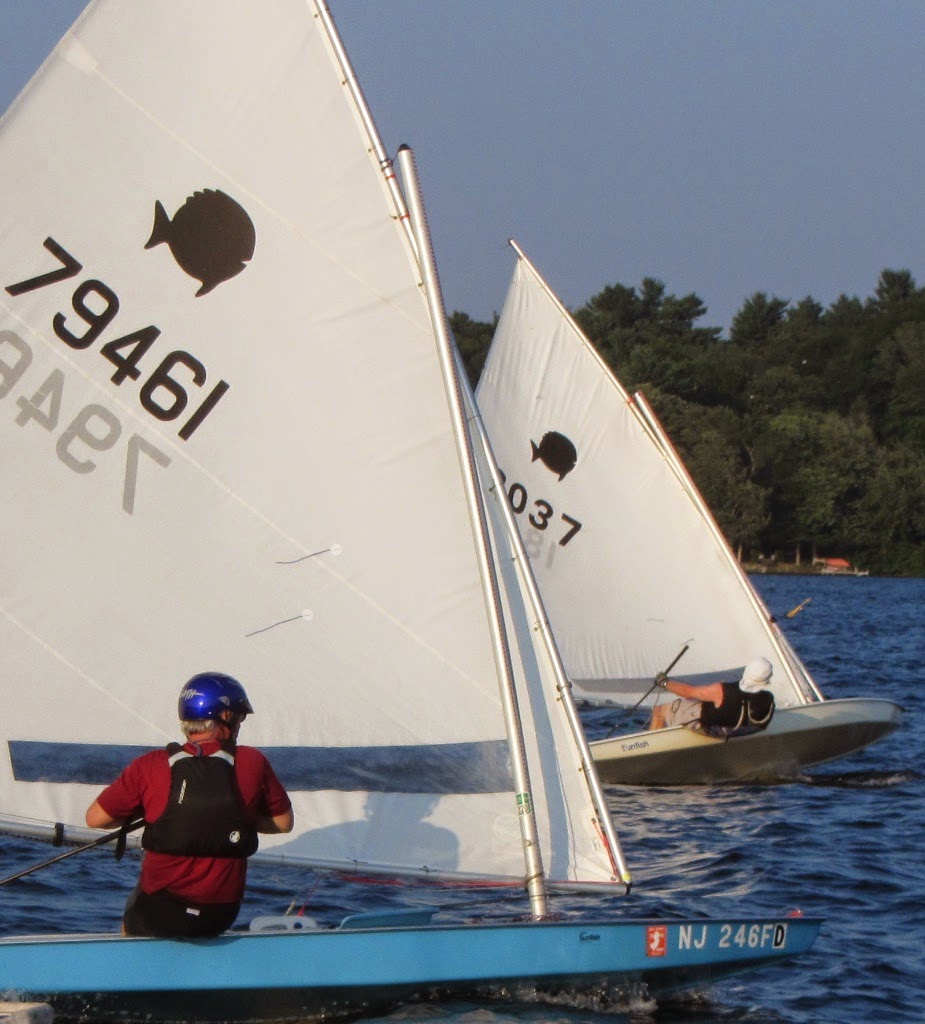 The events of this racing season so far are like the lyrics to a John Lennon song: "Life happens while you're making other plans".  Over the winter, we got several requests to make the Sunfish racing season longer.  Due to lack of resources, we opted to make the first three races of the season on Sundays. The problem was, the weather didn't cooperate for the first week, and we found out that very few of our avid racers can make it on the other two Sundays.

But like life, racing found a way. It turns out that the Wednesday night pursuit race made for perfect Sunfish racing too.  Wednesdays at Massapoag are ostensibly a multi-fleet handicap race, but this year The Wednesday Night Series has attracted more Sunfish Skippers than the Sunday racing has.  The skippers present all agreed that we should run a race within a race, keep our own scores, and treat it as an unofficial second Sunfish series. And so the Double Secret Sunfish Series is now underway.

Four skippers turned out for last night's racing.  The race was a long, 7 leg race, shortened to 5 when the wind died and the Sun was very low on the horizon. For this race within a race, Gary Werden played the shifts brilliantly and got so far in front that he simply disappeared from view to take the 1st first of the series. He came in third overall in the official pursuit race, which is an outstanding finish for a Sunfish skipper. On the fourth leg, Bernadette Levesque played the contrarian, going right, and ducking under the Flying Scot fleet when the rest of the fleet went left into clear air. When the fleet came back together, she was in second place, and she held on to it all the way to the finish line. Mark Stoughton was in last place going around the last mark, went right when everyone else went left, and ended up in third place at the finish with a comfortable lead over John Houstle and Rick Schlosser.

We will be keeping the results on the blog here.


The Sunfish racing season at Massapoag got underway today after a two week delay because Mother Nature didn't cooperate two weeks ago, and the Mother's Day club holiday last week.  Three skippers were able to make it to the race course today. Well, actually four skippers made it, but John Houstle pulled Race Committee duty today and was keeping score.

The wind played hide and seek all day, and skippers who found what little breeze there was were amply rewarded. In the first race, Gary Werden piloted his new Sunfish to a huge lead over Rick Schlosser and Mark Stoughton in the first race, and repeated the feat to a lesser extent in the second.  The third race featured an upset, as Mark Stoughton found some breeze and beat Gary by several boat lengths. He was about to do the same in the fourth race when Gary caught a puff on the downwind leg and crossed the line about a half boat length in front of Mark.

There is one more week of Sunday racing, and two more Wednesday night races before the Sunfish/Laser Regatta on May 31.

We Interrupt this Program for an Important Announcement


We interrupt our usual parade of race results and other Sunfish related news to pass along a request.

Sharon High School has long had a stellar sailing team. In fact, two weeks ago, they came in 4th in the state championships.  They have done all of this with an aging fleet of 420 sailboats, kept afloat through the herculean repair and maintenance efforts of their coach, Gary Werden.  (Gary is also the Race Committee Chair at MYC, and is occasionally known to race Sunfish.)

This year, the sailing team has an opportunity to replace their aging fleet of 420 sailboats.  We received this note today from Gary, which we are passing along to all of you verbatim. Please take a moment and consider donating to this worthy sailing program.


The Sharon High School Athletic Director, Bill Martin, and I are vigorously pursuing the purchase of 6 newer boats (2007) in excellent condition to replace our oldest set of boats (1994) in deteriorating condition. These boats have just come on the market this week. They are in almost new condition, having been professionally maintained and used only nine weeks a year. Boats of this quality are rarely available at this price. It is our expectation that the newer boats would give us 7+ years of trouble free service with first class equipment. This is a far better option than buying new boats at $8,500 each. It is also a better option than buying boats at a lower cost that would likely require serious maintenance and sooner replacement.
The purchase price of the new boats is $20,000. We should net $6,000 from the sale of the old boats. The team has $10,000 in our fundraising account. That leaves us $4,000 short.
The tremendous effort of the kids in fundraising has gotten us this close, but given the meager support from the school and the real costs of a sailing program (even a frugal one), we need a little more to bridge the gap.
Mr. Martin is working every angle within the school system and the town to make this happen, but as of right now, we don’t have any firm commitments to bridge the gap. It is up to the students, parents, coaches, and the community involved in the program to push us over the hump.

Please gather up all your spare change, break into your piggy bank, or just write a check to help build the program that is an important part of your kids’ high school experience. All donations are tax deductible and should be put in a sealed envelope and given to Mr. Martin. Mr. Martin will keep the amount of individual contributions confidential. Checks should be made out to Sharon Sailing Team and will be put in the team account.

Thank you for your support in building a first class program.

Posted by Unknown at 6:43 PM No comments:


Week 1 of racing at Massapoag got off to an inauspicious start, as the wind blew away any chance of racing.  Wind gusts up to 40 miles per hour made safety an issue on the course, and the assembled skippers decided that it was more important to live to fight another day.

Next week is a Massapoag holiday. It is Mother's Day, and there is no racing in honor of all of our mothers.  Wednesday Night pursuit racing starts on May 14, and the annual Massapoag Safety Seminar is on May 17. Sunday racing resumes on May 18.
Posted by Unknown at 9:19 PM 7 comments: