There's an odd thing that has been happening at out little lake lately. When the wind blows, it has been accompanied by snapping and booming noises, and a sailor has to be towed in.  A couple of weeks ago, Eric Aker was the victim with a mysteriously snapped mast. This week it was John Houstle's boom that made a noise like it's name. John was leading the race, when he was hit by a gust and went into a death roll, which became the death knell for his boom.

John, Rick Schlosser and Mark Stoughton did battle not so much with each other, but with the shifty, oscillating southerly, then easterly, then southwesterly winds on the lake today.  Race Strategy and tactics changed by the minute as the wind shifted.  It wasn't the normal ADHD shifts that the lake normally has, it was more of a sinister south to east back to south oscillation, punctuated by occasional blasts from the southwest.

Mark Stoughton took the first race, going to the left into more pressure after a shift in the last 30 seconds before the start eliminated the heavily favored port tack advantage that had persisted all during the course set up.  Rick Schlosser took the second race after forcing Mark into a bad start and dominating the race from there.

The third race provided an excellent demonstration of the "never give up" principle.  Rick took the start, and the race seemed to be a replay of the second race, until Rick got hit by one of those dreaded blasts from the east that put him into irons at the mark.  Both John and Mark passed him and rounded.  John was leading by about 8 boat lengths midway through the downwind leg, when he too was hit by a gust, sending him onto a death roll that ended with his boom snapping. Mark said past him into first place.  Rick Found a sustained puff on the downwind leg and made up almost all of the ground that he lost at the upwind mark, forcing and almost winning a battle with Mark on the last upwind leg.

For the season so far, Mark leads with 23 points, John is two points behind at 25, and Bernadette Levesque is in third with 28.  Full results are here: http://mycsunfish.blogspot.com/p/sailwave-results-for-2014-saturday.html

Don't forget, One week from today is the 65th Annual Massapoag Regatta!  Hope to see you all there.
Posted by Unknown at 8:40 PM No comments:

What is it About Sailors and Biking? 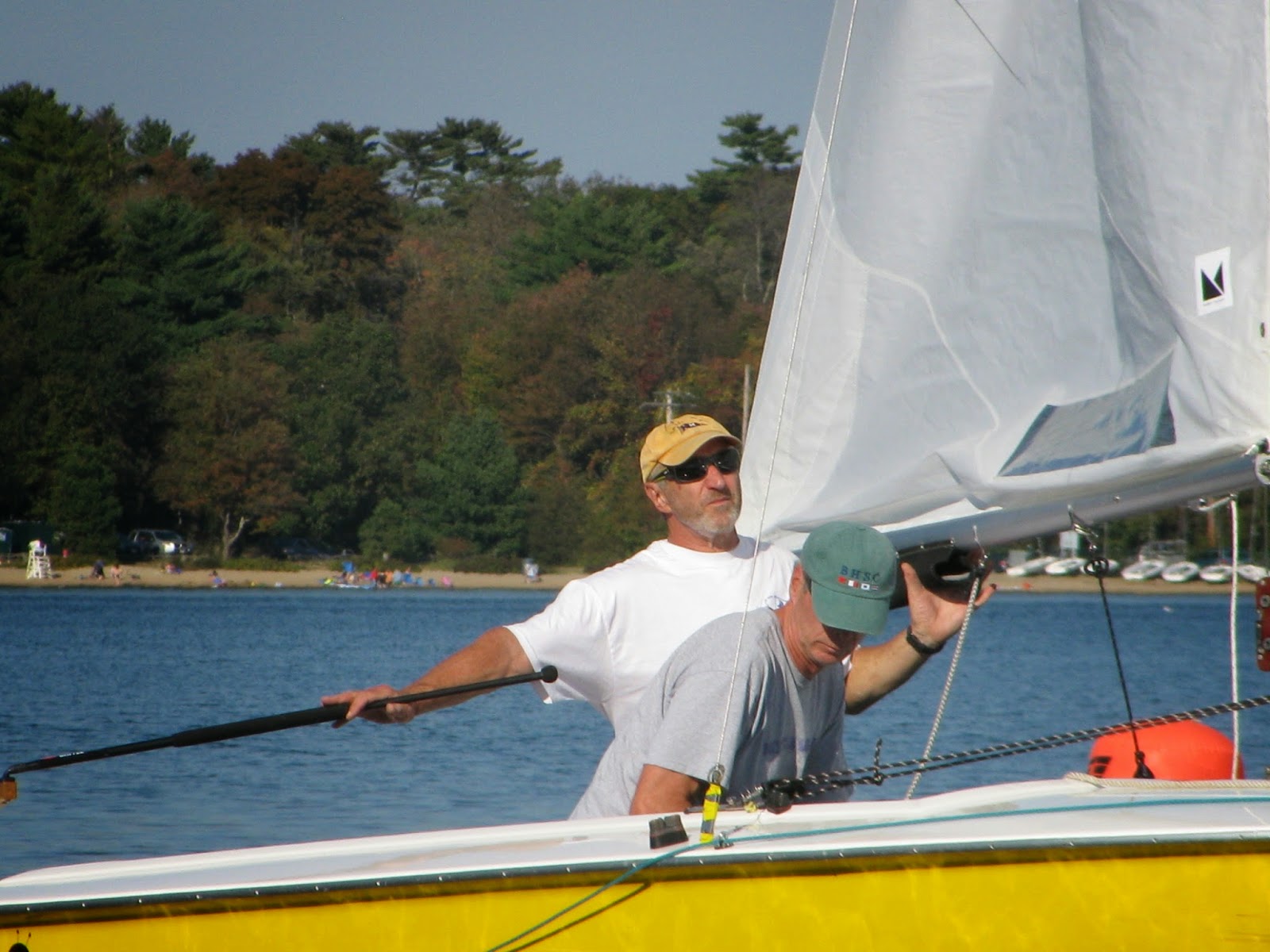 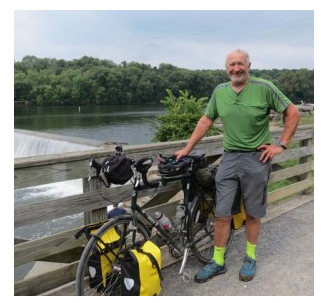 Ed Wojtaszek when he's not sailing

Now the the Wednesday Night Double Secret Series is over, and the sun is setting earlier on what is left of our lake, filling this space during the week is going to be tough.

But not so this week. It seems that a lot of sailors, including your intrepid reporter, are also bicyclists.  My dry sailing next door neighbor Ed Wojteszek has been pedaling his bicycle, across most of the eastern US. His blog, Edeks Attic, chronicles his self-supported rides in a wonderful travelogue format, peppered with pictures, historical tidbits, anecdotes and riding tips.  When he is on the road, he posts tidbits to FaceBook, letting us all know that another epic story is coming our way soon.

Ed's rides aren't easy. His most recent ride, along the Great Alleghany Pass and the historic C&O Canal from Pittsburgh, PA to Washington DC required him to ride between 45 and 65 miles per day. For the uninitiated, a typical Tour deFrance stage is 90-120 miles with a full support team and no gear to carry. Ed is doing about half a tour stage every day by himself, often on dirt roads, carrying all of his gear, tents, sleeping bags, clothes and food, with him.  That is an impressive accomplishment for a 68 year old retiree!

Please take a look at Ed's blog at http://edeksattic.com/.  You won't be disappointed.

Posted by Unknown at 9:41 PM No comments:

Bookend Finishes for Everyone


The wind was so fluky at Massapoag that every skipper seemed to have their own personal breeze. No sooner than the course was set that the wind shifted to the right, requiring the course to be reset. Then it shifted to the left, requiring another reset. After re-squaring the line for the third time in two races, everyone involved just decided to leave the course as is and make the best of whatever wind we had.

Sometimes the course was perfectly square, but most of the time, there was a pronounced right shift that made for some interesting tactics.  The conventional wisdom of sailing the long tack first seemed to be the first to go, as skippers who sailed a short port tack immediately after the start found themselves on the starboard layline very quickly making the trip to the mark a drag race.  Skippers who went to the left were often penalized, but the ever changing rewarded them occasionally with a left at the upwind mark.

A betting man would have lost his shirt betting on the races today. The complete and utter inability of the wind to control itself resulted in the finishing order being anybody's guess.  Everyone who raced today got at least one first place and almost everyone got a matching last place finish.

In the nine races run today, Bernadette Levesque finished the day with 3 firsts. Mark Stoughton took 2, and John Houstle, Dan Abram, Harvey Davidson and Alex Sellar each had one.

Don't forget, it's just 3 more weeks until the Massapoag Annual Regatta. Sign up now!
Posted by Unknown at 12:50 AM No comments:

In  the seven weeks that there were two or more Sunfish skippers racing, Gary took first place all seven times, including two overall 1sts in the pursuit racing, beating the multi-class fleet.  Mark Stoughton followed Gary around the course almost every week, taking five second place finishes and two 3rds.  Bernadette Levesque finished one point ahead of John Houstle to take third.

The Double Secret Wednesday night racing series is over for 2014, but our Saturday series is still going strong, as is the multi-class Sunday series.  Don't forget our Annual Regatta is coming up in just under a month, on September 6-7, the week after Labor Day.

The Racers Showed Up. The Wind Didn't


Everyone showed up to race today, except the wind.  It tried to show up a couple of times, so 5 of us raced.

Series regulars John Houstle, Skip Russell and Mark Stoughton all showed up, along with long time Sunfisher Jim Ronan returning to racing after a long absence, plus a guest from Barrington Yacht Club, Alex Sellar, also making his first appearance in our series.

Racing was very close all day, with lots of lead changes and lots of chatter between the boats. Actually there was a lot of time for chatter, because the wind pulled a disappearing act for huge segments of the day.  Usually, one skipper pulled out to a huge insurmountable lead, followed by the other four finishing within a few feet of each other.

Mark Stoughton opened the big lead twice, once out distancing Jim Ronan in the first race, and then running a port tack drag race to the windward mark in the second race, opening up a 50 yard gap. That same race saw all of the other boats finish within one boat length, forcing Dan Abram on the committee boat to call names as they went across because all the sail numbers were blocked.

Jim Ronan ran away with the third race, playing  perfect port tack start, crossing the entire fleet.  John Houstle attempted to block Jim and Mark, who both started on port, but only blocked Mark, who fought his way back from 5th place at the last mark to finish 2nd behind Jim.

John Houstle left everyone in the proverbial dust in the fourth race, finding tiny puffs of wind here and there to beat the rest of the fleet by by a half leg.  After four races, the wind completely disappeared, forcing and end to the day's racing.

Skip Russell did really well, taking a second and a third, nearly taking a second from Mark in the third race, and Alex, who is getting used to the boat again after a long absence, finished closer than the scored showed, finishing competitively in all the races.

Today's results and the series standings are here: http://mycsunfish.blogspot.com/p/sailwave-results-for-2014-saturday.html

Racing continues next Saturday, and don't forget, our Annual Regatta is under one month away!
Posted by Unknown at 9:37 PM No comments:


This past Sunday, a group of skippers were at the club deciding if there was enough wind to hold the days racing, when Jim Cavenaugh noticed a boat spinning at full throttle in tight circles with nobody aboard.  Several members jumped into the MYC rescue boats and headed for the scene. About 100 yards south of the wayward boat, its operator was in the water unhurt and waving, but tired.  Randy Rubenstein and Mark Stoughton fished him out of the water, while Jim Cavenaugh, Diane and Greg Kampf brought out equipment to attempt to disable and tow the runaway boat.

At that moment, the Sharon Fire Department arrived on the scene and took over the boat recovery operations. Ultimately they opted for the safest alternative, simply waiting for the boat to run out of fuel. The operator was delivered back to shore, none the worse for wear.

Luckily nobody was hurt. This could have been a very serious situation. The operator was not wearing a life jacket (although one was in the boat), and he did not have the ignition kill switch tether attached to him. If he had, the motor would have instantly stopped the moment that he fell out of the boat, he could have climbed back in and gone back on his way.  By the time our boats got to the operator, he was tired and far from shore. If this had happened when nobody was at the club to notice his boat in trouble, we could be reading some very different headlines this morning.

Even though we spend most of our time in sailboats, all MYC members are trained in motorboat operation, and many of our members are experienced in rescue operations. We all know that the water is fun, but it can also be dangerous. We train our members to be aware of the dangers, and to act accordingly.

Unfortunately not everyone on the lake is trained. This is the third rescue performed by alert Massapoag sailors in the past month. We cannot over emphasize the importance of proper safety precautions when operating any boat, be it a sailboat of a motorboat. In the excitement of getting out on the water, it is all too easy to forget safety measures, like putting on a life jacket, or attaching the kill switch tether. Everyone can make mistakes.  Turning boating safety measures into habits makes those mistakes less likely and may save your life someday.
Posted by Unknown at 10:13 PM No comments: