This week, MYC's Kevin Buruchian and Mark Stoughton visited the Wequaquet Lake Yacht Club in Hyannis for their 50th Annual Sunfish Regatta, which also served as the second 2013 Sunfish Regional Championship Regatta. A total of 31 boats showed up on the line in the open division, plus about 15 Sunfish competed in a large youth division for two days of racing.

The weather cooperated nicely, with a sea breeze filling in on both days, Saturday from the south, and Sunday from the north. (After all, it's Cape Cod, where every breeze is a sea breeze.) Racing was close among groups of competitors, which allowed small rivalries to develop among sailors who don't normally race together.

The field was strong and deep, with almost all of the competitors on the Northeast Sunfish Circuit showing up, plus a few competitors from as far away as New York. Bill Brangiforte took first, while Massapoag Yacht Club made good showings in their respective areas, with Kevin Buruchian took 4th in a tie-breaker, while Mark Stoughton bested the local non-circuit WLYC talent in close racing. 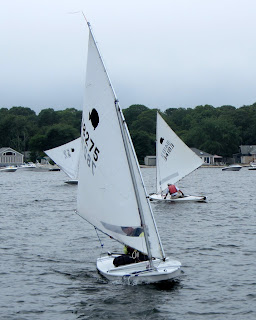 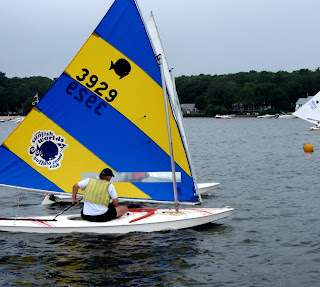 More photos are available at: The MYCSunfish Flickr Site.
Thanks to Corey Charles for photos from the RC boat.
Posted by Unknown at 11:18 PM 2 comments:

Racing was called off today because our week long heat wave decided to fight it's last stand with the cold air coming on from Canada at Lake Massapoag during the first leg of the first race.  It was 94 degrees and mostly sunny at race time with wind appearing to come from straight up.  To say the wind was squirrely would be an improvement. The intrepid Race Committee struggled to set a square course, and finally gave up, leaving us with a triangle course that was sometimes square, sometimes heavily favored on the right, sometimes favored on the left, and even sometimes downwind. Then Thor arrived, putting an immediate stop to the proceedings. Everyone scrambled to shore and abandoned their mobile aluminum and fiberglass lightning rods to wait it out in the clubhouse.

The battle was over and weather cleared up just about when racing would have finished for the day.

Posted by Unknown at 5:54 PM No comments:

This Thing is Getting Popular

The Saturday Sunfish Series is getting more popular and the competition is heating up. Three new racers showed up today to help create the most crowded Sunfish line of the series. Mike Goldstein, Gary Werden and John Houstle came to race today, bringing the total number of Sunfish Sailors entered in the series to 12. The competition was very close all afternoon, with Mark Stoughton, Gary, Mike, and John all taking firsts.  A lot of the races were decided in the last 40 feet, and often the first second and third place finishers were separatated by less than a half boat length. Gary took 4 firsts, Mark 2 and John and Mike took 1 each.  To show how close the competition was, Mark hit for the cycle today, with 2 firsts, 2 seconds, 2 thirds and 2 fourths.
Posted by Unknown at 9:31 PM 8 comments:

Your intrepid MYC Sunfish reporter was not at the races yesterday, so this weeks report is a bit sketchy.  Reports are that the racing was close with first place finishes going to at least three different people.  Alan Silk, of the Barrington Yacht Club is the first non MYC-member to make an appearance at the Series, and took a couple of firsts in tight races.  We have confirmation that he will be back racing with us later this summer.  Welcome Alan!
Posted by Unknown at 7:59 PM No comments:

I Bet You're Wondering Where This Week's Post is

I'll bet that you're looking at this picture and saying "Where are all the Sunfish?  The answer is that there weren't any this weekend because there was a Laser Team Racing regatta.  If sailboat racing is Soccer, Team Racing is like Rugby.  They run races on a "Z" shaped course, with he start and finish in the middle.  Sailors on each team cooperate with each other to block sailors from the other team.  It's almost like a bunch of match races all run simultaneously.  It's confusing to watch, and more confusing to sail in.

The Sunfish (and the sanity) will return this coming Saturday. At least one new Sunfish sailor has committed to join the rest of us, he'll be guest skipper on Sunfish 3929, since Mark can't race on Saturday.
Posted by Unknown at 7:42 AM No comments: