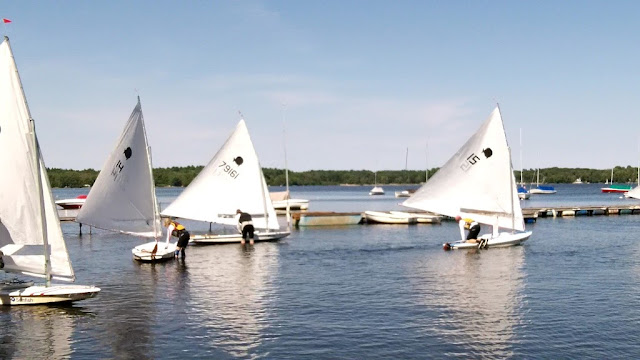 Anyone who has ever sailed on Lake Massapoag knows that it is a mixing bowl for the wind, and gusts can come from any direction at any time. The weather prognosticators called for building gusty winds, so we expected carnage. In the morning it looked like the weathermen were going to be wrong.  It looked like there were going to be gentle breezes  out on the water, making it a light air day. Mother Nature decided to cooperate with the forecast, and the wind rose from a nice 10 mph westerly in the first race to 15 in the second, with gusts coming from random directions, of course, up to 26. Autotacks were in fashion out of the course today, as was a maddening tendency for the wind to decide on occasion to shift seriously to the left at the windward mark, forcing half the fleet to have to overstand the mark in order to make it around, while the others could comfortably ride a starboard tack right up to the mark and sneak by.

This year's regatta turned out to be the Ken Charles show.  Ken got five firsts in the ten race regatta, and his worst finish was a 9.  He beat Alan Beckwith and Kevin Buruchian for first place by 4 points. The rest of the top finishes in every race were spread pretty evenly among Alan Beckwith, Kevin Buruchian, Scott Greenbaum, Gary Werden and Eric Woodman.

Mark Stoughton continued his domination of the B fleet, taking all of the days races. Next year he will be graduating to the A fleet and get his comeuppance.

Full results will be posted on the MYC Web site
Posted by Unknown at 5:26 PM