Birth of a Sunfish

Today we've reached into the archives to present some information which we believe doesn't really exist anywhere on the web.

There are a lot of places on the web, and in books about Sunfish rigging, racing and repair. But nowhere on the web is there any information about how a Sunfish is actually made.  A couple of years ago, LaserPerformance opened up their factory in Portsmouth, Rhode Island for tours.  The photo above was taken on that tour and has been making the rounds on the web for years. The dirty little secret is that it has a bunch of siblings that have never seen the light of day and it's time they saw the light. 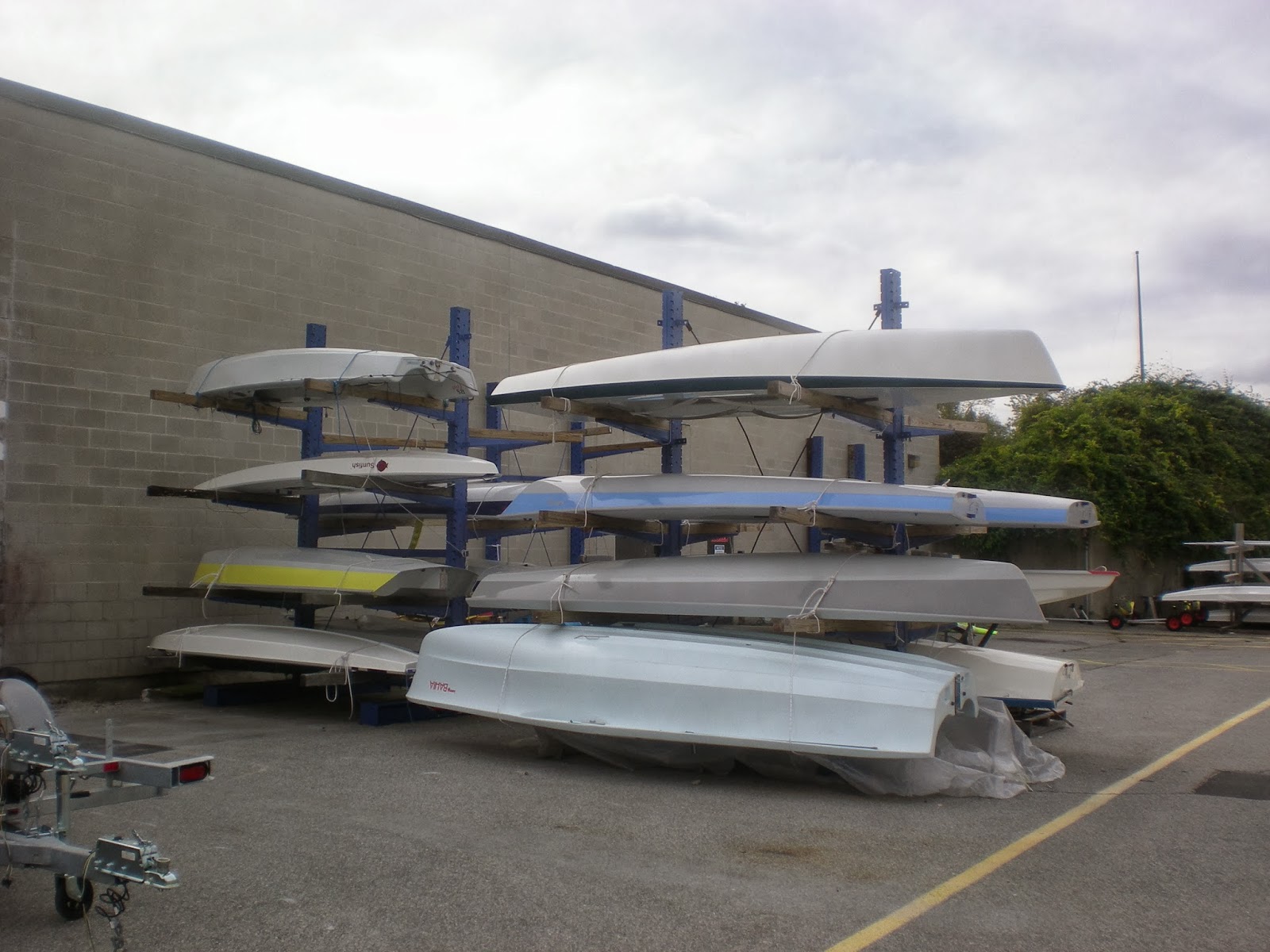 The LaserPerformance factory is located in a nondescript U-shaped building in the HighPoint Industrial Park, right at the very end of Route 24. An fact if Route 24 went a couple of hundred yards further, it would run right through the factory. In fact the only thing that makes the building stand out is the fact there there are boats and molds strewn about the space between the buildings.  Looking at the U from the top, the factory would be on the right, and the production offices are on the left.

The factory floor is large enough to accomodate multiple boat lines simultaneously. The day of the tour, the Sunfish, and Laser production lines were active and boats in various stages of construction occupied places on the production line.

Sunfish construction takes place on two parallel production lines.  The first is for the deck and the second is for the hull.  The production lines merge at the end, where the deck is joined to the hull. The molds are held in large steel frames that make it easy to move the components around the factory floor and to join the two halves together .


Sunfish are built from the outside in. The deck stripes and decals are applied first, before there is even any fiberglass to attach them to. Then the primary gelcoat is applied. 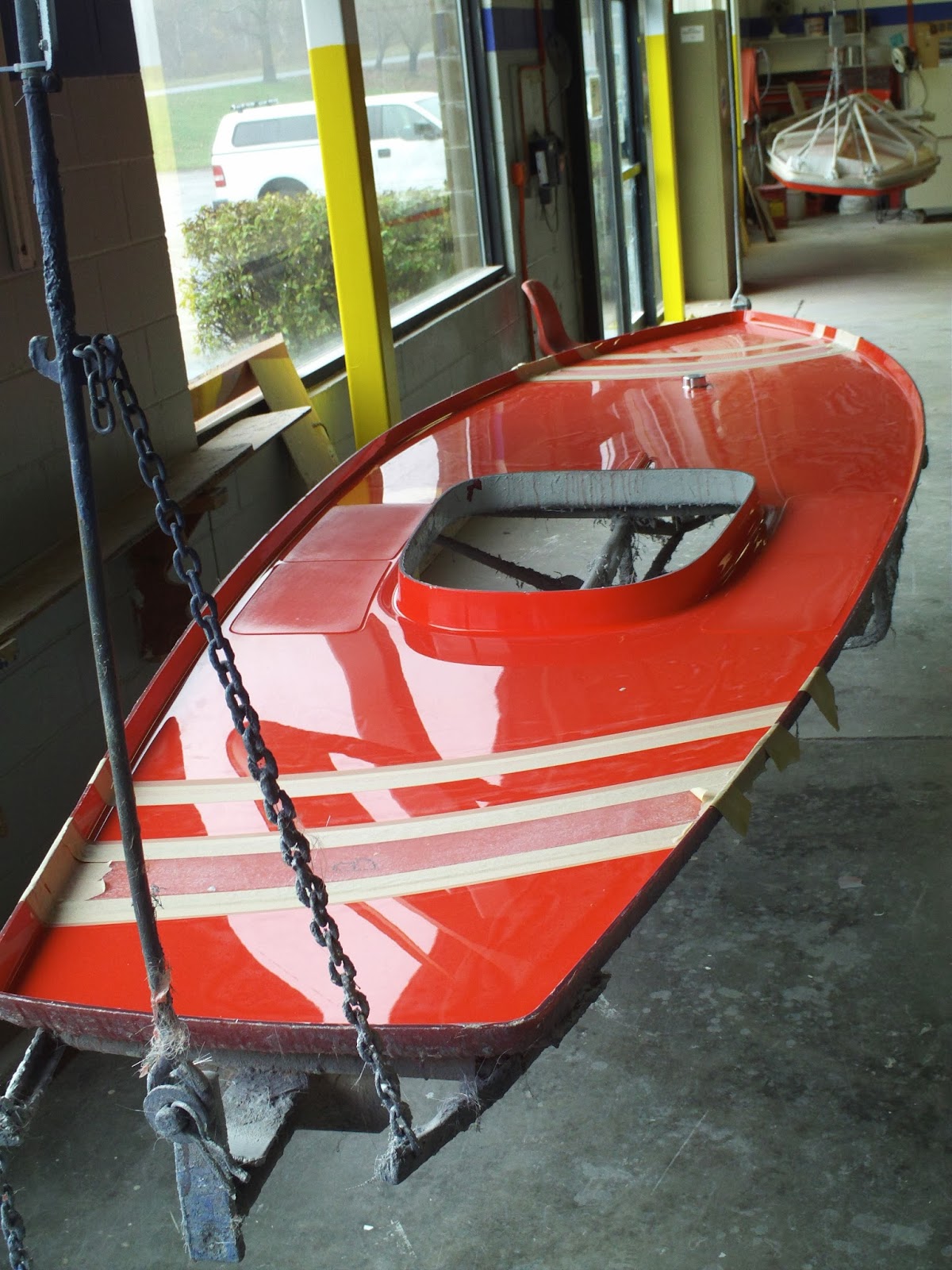 Once the gelcoat is applied, several layers of fiberglass mat are then laid into the mold by hand, using a standardized number and layout and wetting of mat for each boat. Over the years, various Sunfish manufacturers have tinkered with the type and layout of the fiberglass mat, which accounts for the varying dry weights of vintage Sunfish. At the same time that the deck fiberglass is being laid in, the cockpit structure is being built, so then once the resin has cured, metal backing plates for the deck fittings are fiberglassed in place, and the cockpit is epoxied to the deck. Before 1987, the backing plates were made of wood, which often rotted. Once the backing plates are fiberglassed in, the deck is more or less finished.


Meanwhile, the hull is going through its own building process. Once the fiberglass base is laid into the mold, extra fiberglass mat is added in the locations where the cockpit will contact the hull, and the daggerboard trunk and mast step are added.

The addition of extra mat is a relatively new feature. Older Sunfish do not have that padding.


The last part of the hull structure to be added are the styrofoam blocks which add buoyancy and stability to the hull.  The foam blocks are held in place with a jig until they are secured with expanding foam.

At this point, it it time for the deck to be epoxied to the hull.  Resin is applied to both sides, and the frame containing the deck is flipped and aligned with the hull.

When the resin is cured, the finished hull is released from the mold, and the deck fittings are put in place.  Sails and blades come from other areas and are packaged with the boat later when it is shipped to the dealer.